The NCAA’s leading receiver lives in Kalamazoo, MI and he is flying up NFL Draft boards.  Senior receiver Jordan White ended his college career with another utterly ridiculous game in the Little Caesar’s Pizza Bowl, catching 13 passes for 265 yards and 1 touchdown, for a MONSTER 20.4 yard average in the Broncos’ 37-32 loss to Purdue (see above video for some of the damage he inflicted).

Western Michigan University is the school that boasts NFL alumni such as Greg Jennings, Jason Babin, and Louis Delmas.  White will be looking to follow suit and take his game to the next level.  Take a look at the player who could be the biggest sleeper in the 2012 NFL Draft
Notable Accomplishments: 2011 2nd Team All-American – set MAC records for season and career receiving yardage – broke all of Greg Jennings’ WMU career, season, and game receiving records – 7/12 games with 10+ REC – 9/12 games with 100+ YDS – went for 200+ YDS in a game twice – averaged 137.8 YDS/Game – leads NCAA in REC and REC YDS – second in NCAA in REC TDs.
Statistics:

Pro potential: NFLdraftscout.com has White listed as the #24 best WR prospect out of 334 players, which is ridiculous.  White is a dominant receiver at the point of contact with the ball in the air.  He plays a similar style to Wes Welker and Lance Moore, the under-sized WR who roams the slot, can find a way to beat you deep at any moment and catches everything thrown his way.  Playing on a mediocre MAC team did not offer White a chance to showcase his talent nationally until the Little Caesar’s Bowl, but be rest assured that he has been dominating the entire season. 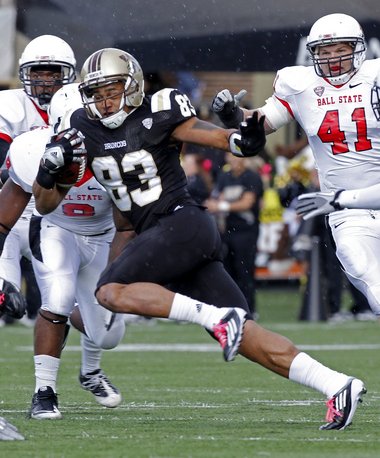 “Strengths: Excellent athleticism. A long strider but still explodes off the line of scrimmage. A natural pass catcher with strong hands who consistently sees the ball into his hands. Tucks the ball away quickly after the catch to brace for big hits. Has quick feet and can sink his hips to throttle down quickly. Very effective running screens. Turns short receptions into big plays by climbing into a second gear. Settles well in space and finds open pockets in the defense. Accelerates quickly after the catch and is a powerful runner who often breaks away from the first defender. Displays good vision as a runner. Uses a stiff arm, as well as his speed, to separate from defenders. Shows good vision and acceleration as a return man. Usually lines up as a slot receiver, but could handle an outside position.

Weaknesses: Not very aggressive in beating the jam at the line and prefers to run around defenders. Needs to improve his route-running; tends to round off routes. Gets lazy on deep comebacks — will turn around early and back his way into the route. Short-arms the ball at times and must get stronger to make catches in traffic. Runs out of control at times and can lose his balance. Doesn’t show great effort as a blocker, failing to break down and struggles to wall off aggressive defenders in space.”

Prediction:  White is certainly on every NFL scout’s radar, and after the season-long display of consistent performance will certainly give him an invite to the scouting combine.  If White can perform well in position drills and run in the 4.4’s then he should be rated as a solid 3rd round prospect, behind only Justin Blackmon, Michael Floyd, Alshon Jeffery, Kendall Wright, Nick Toon, Jarius Wright, and Ryan Broyles.  White’s production and consistency should be seen right away from whatever NFL team drafts him, and will be a reliable receiving option as soon as he hits the field.  Given the right opportunity, White has the chance to be the biggest sleeper in the 2012 draft.