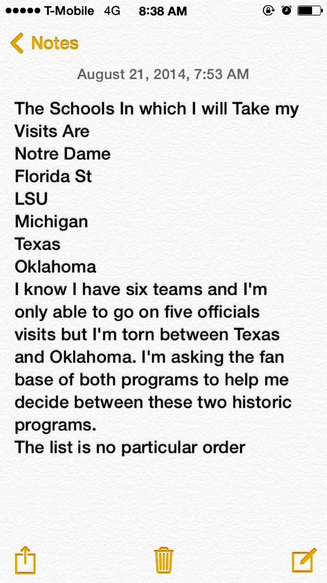 Iman Marshall is the top cornerback recruit for the 2015 class and he put an interesting twist on his recruitment. He’s only allowed to take five official visits, but has six schools that he is interested in. Notre Dame, LSU, Michigan and Florida State are solidly in his top four, but he couldn’t decide where to take the fifth official visit between Oklahoma and Texas and so he has asked the fans to help him decide. I can only imagine the types of responses he has gotten so far and the ridiculous ones he will get once he announces which of the two rival schools he is going to visit.

I always think it’s the worst idea ever when fans interact with recruits and think it is best that they never do, but I guess Marshall has asked for this. Hopefully nothing too terrible is said, but I won’t hold my breath.