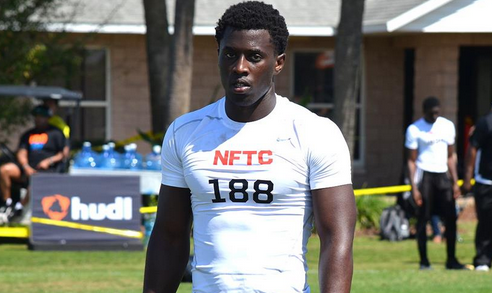 On Thursday morning it was announced that four-star QB and current Texas commit Zach Gentry was coming to visit Michigan this weekend. Gentry would be a huge get (literally, he’s 6’7″ 250 lbs) and it would give Michigan a 2nd quarterback for the 2015 class.

New Jersey three-star TE/DE Jake Pickard, a Wisconsin commit, will be on campus. As well as three-star Nebraska commits Reuben Jones (who decommitted last night and could be first pledge) and Matt Snyder.

UCLA DB Will Lockett will be on campus for a visit, a player Michigan has been making waves with recently. And fast-rising, three-star athlete Chris Williamson is also expected to be on campus.

An unrated, under-the-radar 2015 DB Markel Bush is on his way to visit.

Official Visit to the University Of Michigan this weekend #GoBlue #Wolverines

You’ll notice a theme here. Seven of the nine players scheduled to visit Ann Arbor this weekend are committed to other schools. Michigan is really trying hard to flip players right now in a short amount of time.

Could Brady Hoke Be Central Michigan’s Next Coach?
21 Two-Stars, 24 Three-Stars Playing In The Pro Bowl This Year