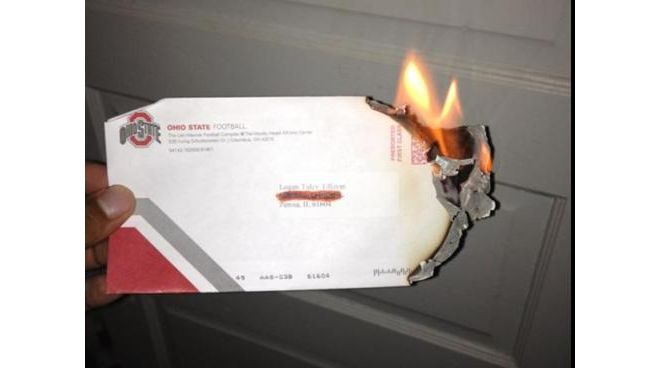 The rivalry between Michigan and Ohio State is one of the most intense and bitter in all of sports, and It can bring on some unusual forms of passion.

Even though Logan Tuley-Tillman committed to the University of Michigan back in February, he is still being courted by some of the top schools in the country including his now biggest rival, The Ohio State University.  Obviously happy with his choice of Michigan,  Tuley-Tillman posted this picture on his Twitter account, saying “#goblue #beatohio”

It’s no wonder that the Buckeyes are interested in the the mammoth, 6-foot-7, 325-pound tank, ranked as the 13th best offensive tackle and 109th best prospect in the country, according to Rivals.com.

I’m sure all Michigan fans are hoping to see Tuley-Tillman burn up the Buckeyes in the same way he does this recruiting letter.

It probably made it even more contemptible for Tuley-Tillman to see that Ohio State didn’t even care enough to spell his home town of Peoria correctly.

The Best Moments From Signing Day 2012
Should P. Diddy pay for son to attend UCLA?