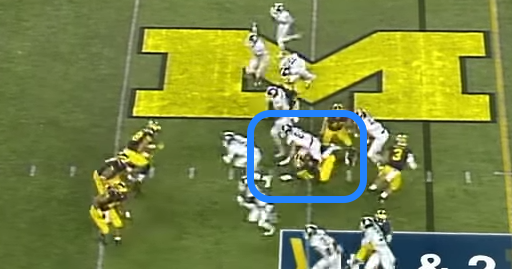 As you probably are well aware, Michigan State pulled off the improbable win over Michigan after Jalen Watts-Jackson returned Blake O’Neil’s botched punt back for a touchdown on the game’s final play.

However, upon reviewing the play again, it appears as though refs could have called a personal foul on a Michigan State defender for running over Michigan’s snapper.

According to NCAA rule, a defensive player cannot make contact with the snapper until one second has elapsed after the snap.  Here’s what the ‘contact against the snapper’ rule reads:

When a team is in scrimmage kick formation, a defensive player may not initiate contact with the snapper until one second has elapsed after the snap (A.R. 9-1-14-I-III).

As you can see in the video below, Scott Sypniewski, UM’s long snapper, gets run over immediately upon the snap and delivers a low ball to O’Neil. If the refs had called a ‘contact against the snapper’ penalty, it would have resulted in a 15-yard foul and an automatic first-down for the Wolverines.

Was MSU offsides as well? Flip the page to see for yourself….

Prev1 of 3Next
In this article:Michigan Football