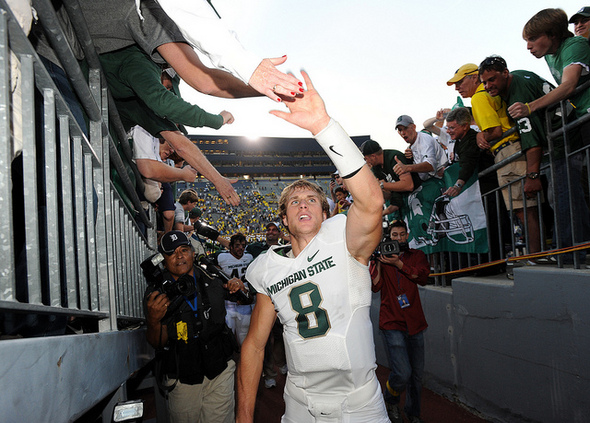 Michigan State Spartan quarterback, Kirk Cousins, has an impressive track record, both on and off the field. Cousins passed 2825 yards and 20 touchdowns last season, leading Michigan State to an 11-2 record and Co-Big Ten Champs. He is also considered one of the top quarterbacks in the nation. Cousins exemplifies the concept of student athlete. He is an excellent student, majoring in Kinesiology and has earned Academic All-Big Ten honors his first three years.

He delivered this speech as the representative of the Big Ten players today at the Big Ten luncheon in Chicago, Illinois. It was good enough that it was given a standing ovation from the players and coaches in attendance, including Denard Robinson and Brady Hoke.

I was very impressed with the video – he managed to mention almost every Big Ten team – in a good way. He embodies all the  qualities of a true student athlete. I can certainly see all his teammates, in the huddle during a game, looking to him as the team leader.