Without a doubt, Michigan played the best game of the season, from the offensive and defensive sides of the ball against Bowling Green. The offense gained 721 yards, 47 on this seemingly easy run by Denard Robinson.

Robinson played only part of the first quarter, due to injury, but still recording 120 yards on the ground and staying a top of the heisman list. The backup quarterbacks got a lot of playing time and played very well. Devin Gardner was the first one off the bench. Gardner has a good arm, showing some touch on his deep balls, which was impressive. One concern I have for Gardner is that he struggled reading the quarterback option play, reminding me too much of last year’s quarterbacks. Tate Forcier gets the crown for the nations best third string quarterback, completing all twelve passes for 110 yards and one touchdown. The way that Forcier ran the offense, I would much rather see him as the primary backup and have Devin Gardner get a medical red-shirt year to help him learn the offense. Whether or not that happens is up to Rodriguez, but know that the quarterback position is a strength with three very capable guys.

The defense did what it had to do and held Bowling Green’s offense to three and outs. I would be surprised if this can continue during the big ten season, but I actually have some optimism.  It was good seeing the defensive line get some pressure and record their first multiple sack game. This pressure needs to continue and will help our defense a lot.  Cameron Gordon is still a work in progress at the deep safety position. Gordon showed his lack of speed in one play, getting burned by a receiver.  The cornerbacks, James Rogers and J.T. Floyd, are two huge surprises so far this year. Both played pretty well against MAC wide receivers but the bigger test will be big ten wide outs.

Prior to the season I predicted Alabama to go down to Arkansas. It wasn’t a bad pick and deep into the second half I thought I picked a big upset. That is until former Michigan quarterback, Ryan Mallet, threw two interceptions late in the second half costing them the game. Mallet did play pretty well, other than those two mistakes, and still has a strong shot a winning the heisman trophy with a strong remainder of the season. I think that most of the reason for the game being so close was Alabama’s defense took a step backwards from last season replacing nine starters.  Alabama has the talent to win it all again, but I don’t think that will happen because of the inexperience on defense.

This story has been told before. The huge hype for football and the anticipation for a new coach, Notre Dame might have another “bad coach.”  Losing in blow out fashion to Stanford last week and to Michigan State and Michigan, Notre Dame is 1-3 and new coach Brian Kelly is feeling the heat. Kelly, the former GVSU coach is very good at what he does and someone who I would have liked at Michigan, is finding out the hard reason why Notre Dame is not the place to go for coaches. 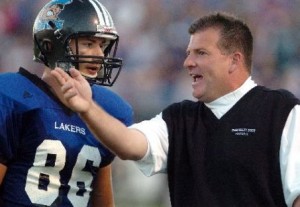