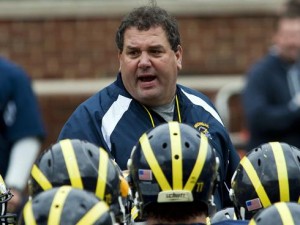 The week or so since the firing of Rich Rod has been a living hell for a lot of Michigan fans. Every Michigan fan wanted to know what Dave Brandon had planned for the day and who he was meeting with. I probably spent a few too many hours checking up on floating rumors and checking mgoblog for what fellow Michigan fans had to say about the search. Even though not many hoped for Hoke, getting a coach who has great Michigan ties and one who knows the tradition, should be great for this program.  Similarly, having named a coach on January 11th (which has to be a good sign-my mom’s birthday) this is a huge relief for the Michigan faithful and I hope that the current players keep faith in the program. I must point out that I predicted this one last week.

I started off very skeptical but I have since changed my opinion. Watching the press conference (posted at the bottom), everything that Dave Brandon and Brady Hoke said reassured me that this was the right hire. Here is a quote from Brandon that makes me feel much better about his not hiring either Miles or Harbaugh.  “A two or three hour meeting with  a coach uncovers much more than you can learn scanning the internet or sifting through the statistics. Sometimes the hype or the PR doesn’t match the real person and this is why you have to interview candidates to make a decision.”  ZING!

Sure Hoke is going to have his doubters because of a previous 47-50 record at Ball State and San Diego State. But I firmly believe now that there was no better candidate for the job. Hoke knows the tradition at Michigan and the passion many fans have for this team. He’s still got work to do. Starting with uncovering his coaching staff so that he can present to recruits and current players what Michigan is going to be about. In the end, however,  it all boils down to whether Hoke can win and regain the program’s prestige.

“Brady was there with us when we won it,” said former Michigan safety Marcus Ray, a member of the 1997 team. “He’s a great coach. You knew he cared about players. He would pull you to the side and ask about you even if you weren’t one of his position players.”

“I’m excited for Brady Hoke and even for Michigan,” Green Bay Packers and former Michigan star Charles Woodson wrote in a text message to The Associated Press. “I’m glad this process is over and we can begin to restore the tradition and respect that was once Michigan.”

“Brady Hoke is a great choice for Michigan,” Carr wrote in a text message.