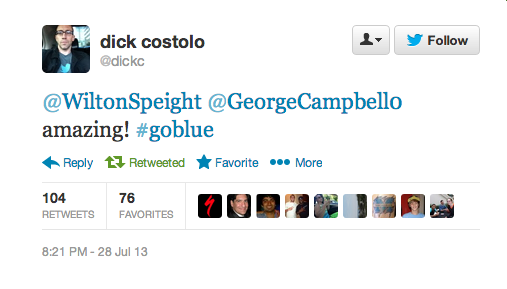 After 2014 Michigan QB commit Wilton Speight tweeted out that the #1 WR for 2015, George Campbell, had committed to Michigan, the CEO of Twitter Dick Costolo committed a minor NCAA violation.  Sure Costolo only wanted to congratulate Campbell on his commitment, but it is a violation none the less.

“NCAA rules do not allow comments about possible recruits on an institution’s social media page or a page belonging to someone affiliated with the institution. In addition, these pages cannot feature photos of prospects and messages cannot be sent to recruits using these social media technologies other than through their e-mail function.”

Per NCAA rules, a booster must adhere by the following rules:

What are examples of impermissible recruiting activities?

As a booster, you may not:

• Contact a prospect by telephone, email, Internet or letter.

• Provide gifts or free or reduced-cost services to a prospect or the prospect’s relatives or guardian.

Nothing will come of this, because it isn’t the first time it has happened, but it is a good rule of thumb to NEVER tweet at a recruit or commitment if you are not a member of the media.