Zach Bohannon, a former Air Force player who transfered to Wisconsin, want’s Obama to play in a pick-up game when he visits the the University of Wisconsin today. The Junior and once an aspiring US President (it has been reported he is a republican), launched a twitter campaign to get the President to come play ball with the team.

@BarackObama, Sir, want a boost tmw for the swing state of Wisconsin? Stop down two blocks & come get a run in with @BadgerMBB! #Badgers

Regardless your views, @BarackObama needs some stress relief tomorrow. A pick-up game of basketball to get some exercise would be perfect!

@BarackObama, Sir, we also won't hold against u that u picked against the #Badgers in our 2nd game in the NCAA tourney last year #WeStillWon

@BarackObama, sir, we will save u the time & money of going to the White House after we win the national title, if u come play w/ us tmw!

Mr. President, Sir, the Kohl Center is only 2 blocks from ur speech, I'm sure u can squeeze quick pick-up game in ur schedule! @BarackObama

Bohannon also tweeted a picture of a customized jersey for the President.

@BarackObama, sir, hot off the press, your very own Wisconsin jersey (44th President edition) from our program! #Obama pic.twitter.com/Of9D6TpM

Because it’s campaign season, this probably isn’t going to happen. However, Bohannon is right, playing some basketball might be a nice a stress reliever for President Obama.

If not today, maybe the Pres can set up a game after November 6th. 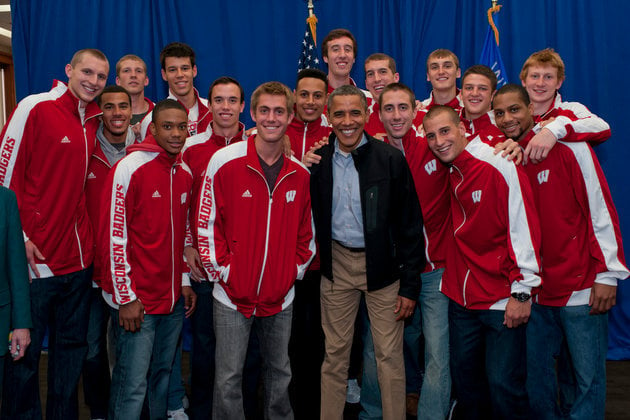 Update: The basketball team got to meet with the President, talking about LSAT and the teams upcoming season.