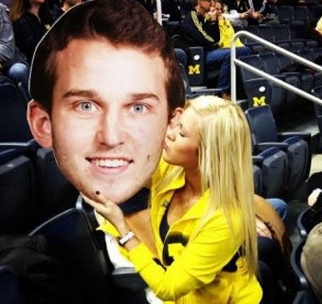 Michigan sophomore guard Nik Stauskas announced his intentions to enter the NBA Draft during a press conference at the school on Tuesday.  Last season’s Big Ten Player of the Year, Stauskas led the Wolverines with a 17.8 points per game average.  Draft Express has the the sharp-shooter out of Mississauga, Ontario, going 14th overall to the Phoenix Suns.

Meanwhile, the son of the Big Dog, Glenn Robinson III, who had a somewhat disappointing sophomore campaign, also announced he was entering the draft at the presser. Draft Express has Robinson going in the second round.

Even without Stauskas and Robinson next season (and potentially Mitch McGary too), the Wolverines shouldn’t have to rebuild too much with Caris LeVert returning, rising sophomores Derrick Walton and Zak Irvin, and an impressive incoming freshman class.