The Federal Judge has issued her ruling for the NCAA-O’Bannon case and it has not gone in the NCAA’s favor. It could have gone a lot worse, but the fact that they were ruled to have violated antitrust laws is a problem, especially for the future cases that they have to face now that this is all over. The Kessler case is a big deal and if they lose that, then it will really all be over.

With decades to cooperate, college sports instead went indignant/hardline, pushed commercialism. Created opposition. Only itself to blame

Judge- schools wouldn’t exit FBS football or D I bball if they were permitted to pay their student athletes a limited amount of compensation — Gabe Feldman (@SportsLawGuy) August 8, 2014

Still plowing, but it seems Wilken shot down most of the NCAA’s defenses before issuing a rather kind ruling.

But unfortunately for the NCAA, the shooting down of arguments does not bode well for the other cases in the pipeline. — Andy Staples (@Andy_Staples) August 8, 2014

The Supreme Court rejects about 99% of petitions. While O’Bannon v. NCAA is novel & important, odds are against it getting to Supreme Court.

Judge here says that language was “incidental” and doesn’t mean that NCAA restrictions on compensation are automatically legal.

Judge notes that the NCAA’ s definition of amateurism is “malleable” and has changed in “significant and contradictory ways” — Gabe Feldman (@SportsLawGuy) August 8, 2014

Just a reminder that the O’Bannon suit is the Doolittle Raid. The Kessler suit is the Enola Gay.

Here’s the case in full and it’s quite a read.

The NCAA also issued their own response. 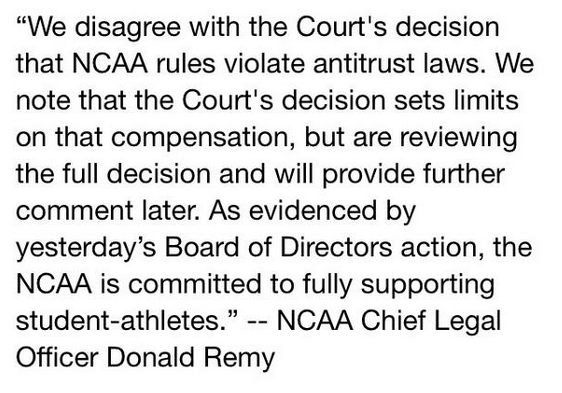