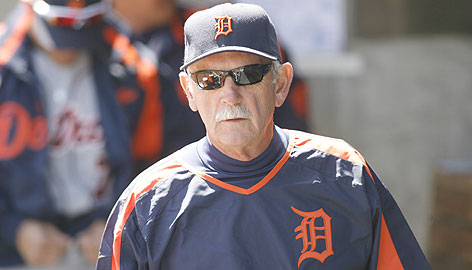 The Detroit Tigers are currently on their longest winning streak since 1934, at 12 games. They are also one game away from clinching the division up 14 over the White Sox and Indians.

Detroit has been playing great baseball and has had several come from behind wins during their streak. Tigers manager, Jim Leyland, has no plans of jinxing the streak. Leyland, 66, said that he has been wearing the same pair of (unwashed) socks and underwear at some point of the day during the 14 day streak.

“I will wear these underwear until we lose” Leyland said. “I can tell you that right now. And they will not be washed. And I don’t give a (expletive) who knows it.”

He followed that up by saying his baseball socks have holes in them from being worn repeatedly. But he issued a warning to Tigers clubhouse manager Jim Schmakel.“I told Schmakel if somebody threw them out, that would be the end,” Leyland said.

It makes sense now why no one was standing by him during batting practice. Leyland wasn’t the only Tigers coach who wouldn’t change his underwear. Hitting coach, Lloyd McLendon, has also been following the ritual.

Leyland and Mclendon don’t get the vote for the weirdest sports superstition. That award should go to Moises Alou, who used to urinate on his hands before games.

**Detroit lost 6-1 to the Oakland A’s last night. The dirty duo get to change their underwear.