Thoughts on the college basketball season so far -

National Player of the Year—Thomas Robinson 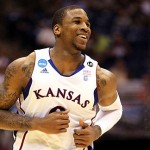 Kansas fans thought they were going to be in a rebuilding year trying to replace the departed Morris twins. However, Bill Self worked his magic and developed the backup to the Morris twins into a perennial POY candidate. Thomas Robinson has been nothing short of spectacular this year, averaging 18 points and 12 rebounds a game.  The guy is a beast, standing 6’9” and 237 lbs. Robinson does his most damage in the low block where he tares his defender apart grabbing offensive boards and playing with his back to the basket. I give him the nod over Anthony Davis of Kentucky, because he has been so critical in Kansas becoming a top 10 team this year. Unfortunately, they don’t have a lot of talent outside of him. 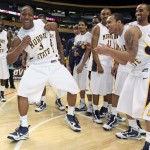 You’ve probably heard that the only remaining undefeated team is Murray State, at 23-0. Well, they were the only undefeated team until losing to Tennessee St. on Feb. 9th.  They are currently ranked number 9 in the country, and have a huge test Feb. 18th against Saint Mary’s. This will be their biggest game, outside of Memphis this year and it gives them a chance to showcase what they’re about.  Murray State plays in the Ohio Valley Conference which is a very underrated conference.  The last couple of years the OVC has had Southern Illinois and Eastern Kentucky, which have good NCAA tournament showings. Last year Murray State pulled off the upset of the tournament by beating Vanderbilt. The Racers were then a number 13 seed and no one had an eye out for them.  They could be seeded as high as a 6 or 7 this year, and you can be sure that no one will be sleeping on them this year.

How far can Syracuse and their 2-3 zone go? 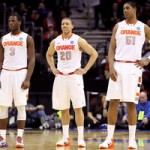 Two things that makes a 2-3 zone work best are when you have length on the wings and a center big enough to clog up the lane. Syracuse certainly has these two things with Fab Melo down low and several guys on the wings who can get in the passing lanes. On the offensive end of the court, Syracuse has enough skill and experience to win the Big East and get a #1 seed. Scoop Jardine, Kris Joseph, C.J. Fair and Brandon Triche have all played in NCAA tournaments before, so having that experience should calm them down the stretch in a close game. Syracuse is one of my favorites to win it all, but I’m not giving you all my information quite yet…. 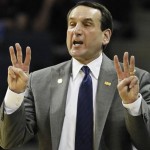 There’s no disputing that Duke is one of the most talented teams in the country. Austin Rivers has all the skills (as he showed against UNC this week) that should make him a very good player, but his game seems more suited for the pros than for college. Coach K has front line and depth with the Plumlee brothers and Ryan Kelly. Although, none of their bigs are consistent with their backs to the basket and get most of their points on offensive rebounds.  They rely heavily on the three point as shown by the 36 they shot against North Carolina.  They have quality resume building wins in Michigan State, Michigan, Kansas, and UNC. On the other end, Duke has a concerning 22 point loss to Ohio State, and losses to unranked Miami and Temple teams. Duke is too inconsistent to be a Final Four team, but if they get hot at the right time, they can hang with any team in the country.

Team to keep an eye on—Georgetown 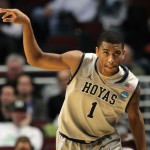 The Big East is definitely having a down year and there really isn’t a clear-cut team, outside of Syracuse, that could be projected for a top NCAA Tournament seed.  John Thompson III has a solid squad and three very good pieces in Jason Clark, Henry Sims, and Hollis Thompson. I like the fact that Georgetown goes eight deep on their bench. Injuries happen and with a bench that is experienced, they shouldn’t drop off as much as other teams.  G-Town’s Princeton offense works when the cuts are crisp and the shots are falling. They can struggle offensively, but they make up for it by playing strong defense and being a good rebounding team.

Is this the best group of freshman at Kentucky? 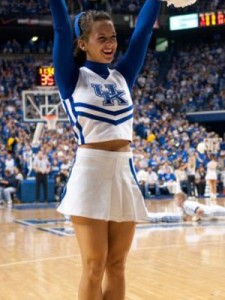 Right now, Kentucky  is the team that everyone has winning the National Championship. This  group of Kentucky freshman is more dominant than any of the previous and they actually play defense. The man in the middle, Anthony Davis, is the reason why everyone is looking at the Wildcats as early favorites. He is a freak of nature standing at 6’10” with a 7-4 wingspan. Understandably, he has already set a single-season block record at Kentucky through only 19 games. Dicky V has said that Davis could be the first freshman to hit a grand slam, meaning he could win National Freshman of the Year, National Player of the Year, Defensive player of the Year, and be the first pick in the NBA draft. This really isn’t too far fetched, because he basically has three of those already checked off the list.

I’m not completely buying into Kentucky just yet for the sole reason of their youth. Let’s say for instance they meet Ohio State, who has a year playing in the tournament under their belt.  Davis and Jared Sullinger battling down low would be a thing of beauty to see, but they pretty much wash each other out.  The Kentucky talent outside of Davis is Darius Miller, Doron Lamb, Terrance Jones and Michael Kidd-Gilchrist, is still very good. But, what makes them any different from the John Wall-Demarcus Cousins team that lost to West Virginia at the Final Four back in 2010? I think a team like Ohio State, which has a player up to par as Davis, and with guys like William Bufford and Deshaun Thomas, they could dominate them on both ends of the court.