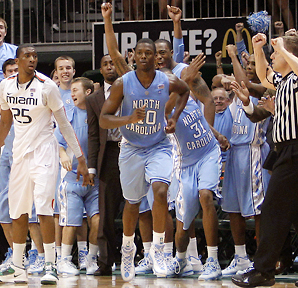 North Carolina is very much deserving of the top spot. Roy Williams has all 5 starters back from an Elite 8 team. That includes Harrison Barnes, who looked as good as any player late last season. He is an early prediction for the Naismith National Player of the Year with Kendall Marshall at the point.

Kentucky has a new bunch of freshmen sensations in Anthony Davis, Marquis Teague and Michael Gilchrist. John Calipari will have to groom these kids into playing smart basketball like Kentucky did during the tournament. Kentucky is a solid pick as the #2 team in the Nation. They return there best player, Terrence Jones, from last year. 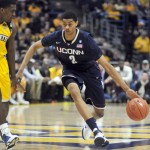 The Big East has 6 teams ranked in the top 25, no surprise here. Defending National Champions, Connecticut Huskies, are ranked at the top of the Big East at #4. They  return sharp shooting Jeremy Lamb, who will see increased responsibilities with the departure of Kemba Walker. Their high rankings were also helped out by the surprise that top 2012 recruit, Andre Drummond, decided to forgo attending prep school and instead going to Connecticut. A team out of the Big East that could surprise some is Cincinnati.

Last year Michigan State was ranked by many as the #1 preseason team. This year, they don’t even crack the top 25. A bit surprising as Tom Izzo and the Spartans return Keith Appling and Draymond Greed. I would probably rank them in my top 25. The Big Ten representatives are Ohio State, Wisconsin and Michigan. OSU

There several very good teams in the bottom half on the top 25. UCLA at #15 has 305-pound center Josh Smith, who will be un-guardable in the Pac 12. Xavier at #18 returns A-10 player of the year Tru Holliday, and looks to be a formidable foe in a solid Atlantic 10. At #24  the Alabama Crimson Tide and JaMychal Green have the talent to win the SEC, they just need  to cut down on turnovers.