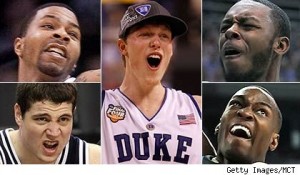 PG Jacob Pullen, KSU- Jacob Pullen is his name and “pullen” is his game.  Pullen likes to torture his defenders with a variety of moves and jumpers. In the last second round of the NCAA tournament, Pullen had 34 points against, and held fellow All-American, Jimmer Fredette, to 4-13 shooting. Moving to PG this season will add plenty of opportunities to increase last year’s 20 ppg average and keep the ball in the hands of Kansas State’s best player.
Other possibilities: Kemba Walker, Uconn

SG Jimmer Fredette, BYU- Jimmy Fredette can undoubtedly score with the best of ’em. Last year, he notched 49 against Arizona and 37 in an NCAA upset over Florida. If you’ve never seen his game, he could be described like J.J. Redick because he has an unlimited range and a perfect shot. Fredette, however, is a better offensive threat than Redick because he creates for himself off the dribble, which Reddick was unable to do. I wouldn’t be surprised with an increase in last season’s 25 scoring average, because plain and simple, Fredette is the best player in his conference and possibly the entire nation.
Other Possibilities: Nolan Smith, Duke
LaceDarius Dunn, Baylor

SF Harrison Barnes, UNC- The consensus #1 recruit, Barnes will likely play his mandatory season at Carolina and then be selected #1 in the NBA draft. Scouts drool over his skill set at 6’8, and 215lbs and compare his game to Lebron James. This is a reach, however, because Lebron was  30 lbs heaver at the same age. I like his touch and 3 pointer abilities, but at the rim Barnes could struggle against bigger and heaver defenders. Without a doubt, Barnes will be exciting to watch and will take control of a young UNC team and be the “go to guy” and leading them back to the NCAA tournament.
Other Possibilities: Scotty Hopson, Tennessee
Durrell Summers, MSU

PF Kyle Singler, Duke- At 6’9, Singler is a nightmare for opposing teams. He is a match up problem if a taller defender guards him, because he can penetrate with a plethora of jabs and head fakes. Opposing a smaller defender, Singler goes into the post and shoots right over the top. The departure of Jon Scheyer, surprisingly, could help Singler’s scoring production. Freshmen point guard, Kyrie Irving, replaces Scheyer and creates effortlessly for teammates . Singler is the best player on the #1 team and because of that, is my front runner for National Player of the Year.
Other Possibilities: Marcus Morris, Kansas
Terrence Jones, Kentucky

C Jared Sullinger, OSU- Sullinger has a better offensive game than former #1 overall pick, Greg Oden, but looks about thirty years younger. At 6’9, 280 lbs, Sullinger moves rather well and loves filling the lanes for the easy flush on the break. He can push his defenders around down low as he did to a top 10 Florida team going for 26 and 10. Sullinger likely will only stick around for the year, because he’s already that good. He has the chance to walk away with   B10 Freshman of the Year , B10 Player of the Year, National Freshman and Player of the Year honors.