On Thursday afternoon, Mitch McGary announced his intent to play college basketball at the University of Michigan. The #2 ranked prospect in the country chose to bring his talent to Ann Arbor instead of Duke or Florida. McGary gives U of M their most highly touted recruit since Chris Webber in 1991. 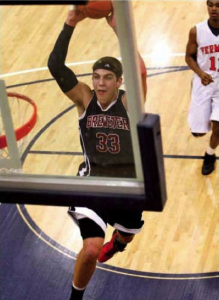 As a lifelong Michigan fan, it was hard to contain my excitement when McGary announced his college decision. I recalled all the modest Michigan basketball teams that my dad and I watched over the years. Obviously, there were a few bright spots (Daniel Horton, Louis Bullock, Dion Harris), but for the most part we rarely saw a team challenging for the Big Ten title. McGary, more than likely, makes Michigan a Big Ten contender, and a viable Final Four team.

Scout’s Brian Snow has bright praise for the 6’10, 245 pound McGary, nicknamed ‘white-lightning’. “To put bluntly-he’d be the starting center and the best player on Michigan’s team the moment he steps on campus.” If McGary inserts himself as the best player out of a group that includes Juniors, Tim Hardaway Jr., Evan Smotrycz and Jordan Morgan, it would be an impressive feat, but very possible.

The thing that I admire most about McGary is his work ethic and constant one hundred and ten percent effort. Here’s ESPN’s analysis on Mr. McGary:

It is difficult to find players who bring all-out effort and energy on a consistent basis, but McGary does it better than anyone. Not only does he bring energy to his own game, he gives it to his teammates. His motor never stops as he constantly works the backboard, runs the floor and dives on the floor for loose balls. His enthusiasm even carries over when he’s on the bench as he cheers on his teammates and remains vocal. McGary has talent and physical tools, but his motor makes him special and will make him money one day.”

Michigan fans could be reminded of Chris Webber when they watch McGary play.  Although a lefty, McGary plays phenomenally with his back to the basket. He has a great touch around the rim and is always looking to pass from the low block, similar to that of Webber.  Coast 2 Coast recruiting draws comparison to former Florida Gator, David Lee.

When watching Mitch McGary play, it’s easy to envision a young David Lee. Whether he is effortlessly running the floor, shooting left-handed fadeaways, abusing the rim with powerful dunks, or blocking shots into next Wednesday, all punctuated by electric yells, it’s a beautiful sight to any basketball fan.

At West Virginia and for his first three years at Michigan, John Beilein’s offense has predominately been guard oriented with one post player and four wings. With McGary and the front-line talent the Wolverines will possess, it’s likely Belein will redesign his offense to suit his new strength. The Wolverines are likely to go to a bigger lineup with two post players and three wings.

Securing the commitment of McGary has the potential to be program changing for Michigan. Although it’s unclear how long he will stay in Ann Arbor before jumping to the NBA, this commitment gives Michigan a player to build around. McGary can be slated at either the power forward or center position.  He has the ability to take his defender off the dribble and  can be a threat shooting 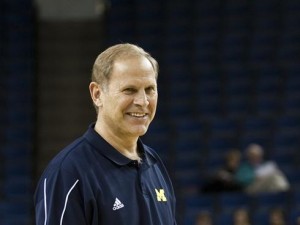 or turning with his back to the basket.  Beilein has much flexibility with McGary on the roster and it’s likely Michigan fans could see Smotrycz at the small forward, McGary at power forward and Morgan at center.

McGary is the first five-star recruit John Beilein has secured at Michigan.  Everyone doubted his ability to secure a tier one prospect because of his offense, but he has done it, and it’s likely to continue from here. Michigan is definitely a team on the rise, and with another Big Ten/NCAA tournament run, this team could be a preseason top 5 team in 2012.

In this article:Michigan Basketball, Mitch McGary