Dave Gavitt, founder of the Big East and Basketball Hall of Fame inductee, died friday night according to his family.

Gavitt was the head basketball coach of Providence College from 1969 to 1979, taking the team to eight straight postseason appearances including a Final Four in 1973. Six years later, he served on a committee that created the original Big East conference (Providence, St. Johns, Georgetown, Syracuse, Seton Hall, Rutgers, Connecticut, Holy Cross, and Boston College). He was later named commissioner of the league.

Gavitt became the head coach of the 1980 U.S. Olympic team that included Isiah Thomas, Sam Bowie, and Mark Aguirre. However, the games never took place because of boycotts of the Soviet Union’s war with Afghanistan.

From 1990 to 1994, Gavitt was the CEO of the Boston Celtics.  In 1995, he was the President of the NCAA Foundation, which he headed for two years. Gavitt was inducted into the Basketball Hall of Fame on September 8, 2006.

Jim Boeheim, Syracuse head basketball coach said that Gavitt’s “responsible for everything that’s happened to me and to all of us,” referring to Big East coaches. “There would be no (national) championship, no Hall of Fame, none of it.”  Every year, Syracuse and other Big East teams battle in the Big East tournament for the Dave Gavitt trophy. 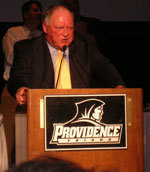 Here is Gavitt’s biography, according to the Basketball Hall of Fame.

From coach of Providence College to founder of the Big East Conference to chairperson of the NCAA Division I Men’s Basketball Committee to president of USA Basketball, Gavitt has left a formidable imprint on the game he loves.

As coach of the Friars from 1969 to 1979, Gavitt led Providence College to 209 wins, including eight consecutive 20-win seasons, five NCAA tournament appearances, the 1973 Final Four, and three NIT appearances. Gavitt galvanized efforts to create the Big East Conference in 1979 and served as the powerhouse conference’s first commissioner until 1990. His work with the Division I Men’s Basketball Committee resulted in the expansion of the NCAA tournament to 64 teams and the use of domed stadiums for the Final Four. His lengthy résumé and contributions to New England basketball includes serving as Senior Executive Vice-President of the Boston Celtics from 1990 to 1994 and Chairman of the Naismith Memorial Basketball Hall of Fame from 1995 to 2003.