College Basketball-10 Teams Who Can Win It All - 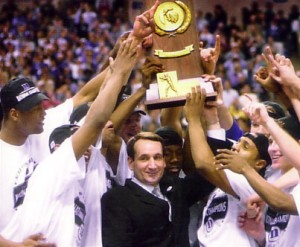 It would be stupid not to have a team that returns two All Americans, in Nolan Smith and Kyle Singler, on the list. The major departure, Jon Scheyer, will be replaced by “diaper dandy,”  Kyrie Irving. Irving has an NBA type of game and will be an exciting player to watch. His development and whether he can match Scheyer’s abilities in late game situations, will determine if Duke can repeat. I liked the improvement I saw from the Plumlee brothers and wIth Duke’s two big forces. Andre Dawkins, a three point specialist, and  Liberty transfer and brother of Stephon Curry, Seth Curry, puts Duke as the preseason #1 team and the team to beat.

Michigan State, without a doubt, will compete for the Big 10 Championship and National Champioship. The thing that stands out to me about MSU is the return of senior point guard, Kalin Lucas.  Lucas could have easily departed, but returns and gives MSU experience and talent at the most important position on the court. Along with Lucas, MSU has it’s own “Big 3” with Durrell Summers and Draymond Green. My concern for MSU is whether they can find a replacement for SF, Ramar Morgan. Chris Allen would have been the likely answer, but was kicked off the team over the summer for an apparent “conflict” with a teammate over his girlfriend. Korie Lucas, could be the replacement, but would make the lineup rather small. I’m sure Tom Izzo can find a replacement with guys like Derrick Nix, Adrien Payne, Russell Byrd and Keith Appling. I’ll be rooting for State this season, as a former teammate of mine, Nick Giard, made the team as a walk on and could possibly win himself a National Championship.

Lose: Denis Clemente, Luis Colon, Chris Merriewether
Key Returnees: Jacob Pullen, Curtis Kelly, Jamar Samuels, Rodney McGruder, Wally Judge
Newcomers: Freddy Asprilla, Nino Williams, Shane Southwell, Will Spradling
Coach Frank Martin moved Jacob Pullen over to PG after the departure of Denis Clemente, last year’s PG. I like this move because it gives Pullen and his 20ppg average, more touches with the ball. Kansas State’s has a high flying front court with Wally Judge and Jamar Samuel, both of which can flourish with the ball being in Pullen’s hands.  Curtis Kelly, a low block player, gives KSU a true center and a force in the middle. Kelly does need to practice harder, or else he won’t escape coach Martin’s dog house and suit up for any games.  If KSU can find a bench with freshman, Rodney Mcgruder, they could make a major push for a high seed and run during the tournament.

NORTH CAROLINA
Record: 20-17 (NIT)
Lose: Ed Davis, Marcus Ginyard, Deon Thompson, Travis Wear, David Wear
Key Returnees: Tyler Zeller, Larry Drew II, John Henson, Dexter Strickland, Leslie McDonald
Newcomers: Harrison Barnes, Reggie Bullock, Kendall Marshall, Justin Knox
I’m probably too high on a team full of freshman with inexperience and potential. It’s possible their starting lineup could consists of all future lottery picks. Harrison Barnes is a gimme at SF and will depart after his mandatory season before being selected #1 overall.  At the PG and SG positions, Larry Drew and Dexter Strickland are tabbed the starters, but could be replaced by freshman Kendall Marshall and Reggie Bullocks by year’s end.  Marshall is the type of player that you want on the court as much as possible, because he makes his teammates better. If Bullocks entered the starting lineup along with Barnes, UNC would have the most dynamic wings in the entire country. I like both of the starters, Jon Henson and Tyler Zeller, both of which have high ceiling potentials. Behind these two is the major concern, as the only capable sub is Alabama transfer, Justin Knox. If this team can stay healthy through the season and reach anywhere close to their maximum potential, watch out ACC.

OHIO STATE
Record: 29-8 (Sweet 16)
Lose: Evan Turner, P.J. Hill, Kyle Madsen, Jeremie Simmons
Key Returnees: William Buford, David Lighty, Jon Diebler, Dallas Lauderdale
Newcomers:Jared Sullinger, DeShaun Thomas, Aaron Craft, J.D. Weatherspoon, Lenzelle Smith, Jordan SibertYou might ask how could losing National Player of they Year, Evan Turner, could possibly allow OSU to win it all this season. Jared Sullinger, my pick for National Freshman of the Year, is the reason. He is going to dominate around the paint and allow OSU’s shooters, Jon Diebler and William Bufford, more open up and more shots. Dallas Lauderdale, along with Sullinger, give Ohio State two very big guys who outweigh and outmuscles, every Big 10 team.  The PG position will be owned by freshman Aaron Craft, who is a pass first type of player, who will love his stats once he gets the ball to Sullinger.  David Lighty is another option for coach Thad Matta and makes up possibly the best starting lineup in the nation.

Record: 25-9 (second round of the NCAA tournament)
Lose: Jermaine Dixon, Chase Adams
Key Returnees: Ashton Gibbs, Brad Wanamaker, Gilbert Brown, Gary McGhee, Nasir Robinson, Travon Woodall, Dante Taylor
Newcomers: J.J. Moore, Cameron Wright, Isaiah EppsJermaine Dixon’s departure, really hurts Pittsburgh, not only because he was the best defender on the team, but because Pitt will miss his scoring. Ashton Gibbs and Brad Wannamaker return and each averaged over 12 a game. These two guards can carry Pittsburgh through the Big East, but behind them they need to get other players to develop, especially former highly recruited, Dante Taylor. Taylor is a big man with an athletic game that pairs well with Gary McGhee, a true banger. Jamie Dixon, is a coach known for getting the most out of his talent, but will have his hands full if he cannot find scoring outside Wannamaker and Gibbs.

Record: 26-10 (Sweet 16)
Lose: Quincy Pondexter, Elston Turner, Clarence Trent
Key Returnees: Isaiah Thomas, Venoy Overton, Matthew Bryan-Amaning, Justin Holiday, Abdul Gaddy, Scott Suggs, Darnell Gant, Tyreese Breshers, C.J. Wilcox
Newcomers: Aziz Ndiaye, Terrence Ross, Desmond Simmons
Last season, Washington caught fire at the right time. Making a run late in the Pac 10 season and earning a #10 seed, Washington upset Marquette in the first round and New Mexico in the second. Isiah Thomas (yes, that’s his name) is their leader. Thomas may just be the quickest players in the entire country and is capable of starting a one man fast-break. Thomas has three good guards alongside, Abdul Gaddy, a former 5 star prospect, Venoy Overton, and Justin Holliday. Lacking a big man will be the team’s problem. Last season they could go small with 6’6, Quincy Pondexter at center, but he has no more eligibility. Washington doesn’t have many options other than  Bryan Amaning, who is the only returning player over 6’6. If somehow they can get production from 7’1 freshman, Aziz Ndiaye, you might watch Washington cutting down the nets.

Record: 33-3 (lost in second round of NCAA tournament)
Lose: Sherron Collins, Cole Aldrich, Xavier Henry
Key Returnees: Tyshawn Taylor, Brady Morningstar, Marcus and Markieff Morris, Tyrel Reed, Thomas Robinson, Travis Releford, Mario Little
Newcomers: Josh Selby, Royce WoolridgeKansas is on this list because freshman sensation, Josh Selby, was ruled eligible by the NCAA in December, which is unfortunate for the January date with Michigan.  I think Selby has the type of talent that will have Kansas fans forgetting Sheron Collins.  Tyshawn Tyler, a sometimes lackadaisical player but talented none the less, will man the PG spot until Selby’s arrival. Losing Cole Aldrich is a hit to the front couty, but the Morris brothers look good and will hold their own. Brady Morningstar, and Tyrel Reed both on the 2008 National Championship team, give Kansas experience at the guard spots with the ability to lock down defenders and shoot when called on. Excpect Bill Self’s team to hit stride once Selby  gets some experience and understand what being the go-to-guy is about.

Record: 21-15 (NIT)
Lose: Dominique Keller, Stan Simpson
Key Returnees: Demetri McCamey, Mike Davis, Mike Tisdale, D.J. Richardson, Brandon Paul, Bill Cole, Tyler Griffey
Newcomers: Jereme Richmond, Meyers Leonard, Crandall HeadIllinois, in my opinion is vastly underrated. They return more starters than MSU and the BIg 10 Player of the Year runner up, Demetrit McCamey. McCamey is one of those players who is fun to watch because of his slick cross-overs and head fakes that he creates for his shot.  Illinois also has a capable front court, with 6’9 Mike Davis, and 7’0 Mike Tisdale, both  can provide offensive sparks when needed. If they can get Freshman Jerome Richmond, to continue developing, he could be vital because of his ball handling abilities at 6’6.  Sophomores D.J. Richardson and Brandon Paul need to work on their careless mistakes and make the sophomore jump for Illinois team to be a major surprise.

Record: 30-5 (Sweet 16)
Lose: Wesley Johnson, Andy Rautins, Arinze Onuaku
Key Returnees: Brandon Triche, Scoop Jardine, Kris Joseph, Rick Jackson, DaShonte Riley, Mookie Jones
Newcomers:Fab Melo, Dion Waiters, C.J. FairSyracuse is similar to Kansas in that they lost their three best players from last season (Johnson, Rautins and Onuaku). I like this Syracuse team and every team coached by Jim Boeheim, because of the 2-3 defense.  The 2-3 defense is disruptive when the back 3 has length, which this Syracuse team has.  The starters are, 6’7 Kris Joseph, 6’8 Rick Jackson, and 7’0 Fab Melo and also Detroit Country Day graduate, 6’10 Deshonte Riley, gives Syracuse another lengthy body off the bench. The front of the defense are manned by the PG, Scoop Jardine, and SG, Brandon Triche. Both these players can score buckets and have experience from last year. Although this team doesn’t have the same talent as last season’s team, don’t underestimate what a disruptive defense can do.
In this article: