The Chicago Blackhawks gave their Stanley Cup rings out to their players this weekend in a private ceremony and they are awesome.  The ring is a whopping 14.68 carats and is made of 260 diamonds.  The designers at Jostens gave an explanation of the rings design:

The spectacular ring is framed by the words “Stanley Cup” and “Champions” and features the iconic Blackhawks logo fashioned in round brilliant and marquis cut diamonds with custom-cut tapered rubies set on a background of 14 kt. white gold.

The side design features seven baguette-cut rubies and two pear-shaped emeralds set in the shape of the Blackhawks’ secondary logo. This emblem is set against the background of a “C” formed in yellow gold and yellow diamonds. Each ring is personalized with a championship team member’s name and respective number against an antique black background.

The opposite side features five diamond-studded Stanley Cup trophies. Each one represents a championship title, and includes the years in which they were won, including 1934, 1938, 1961, 2010 and 2013.”

My personal favorite part of the ring is the inside where it shows the logo of the teams they defeated and the series outcome for each round along the way.  The rest of the ring’s design is pretty standard for Championship rings, but I’ve never seen the interior of the ring designed this way before. 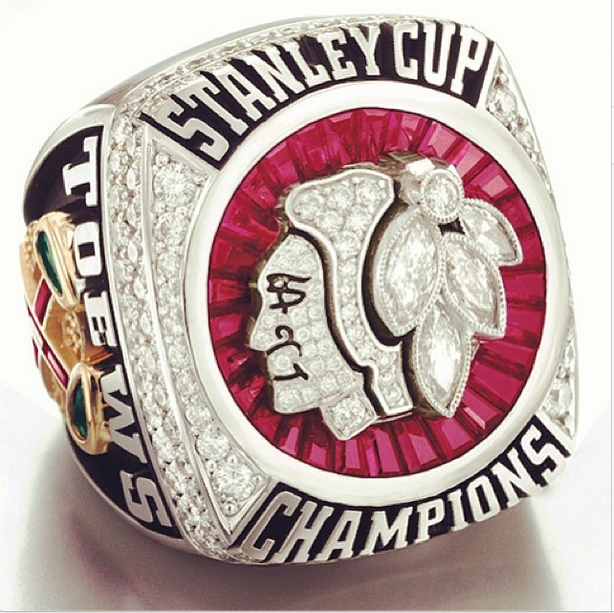