Robert Sacre fouls out, has to stay in the game anyways due to lack of Laker bench players 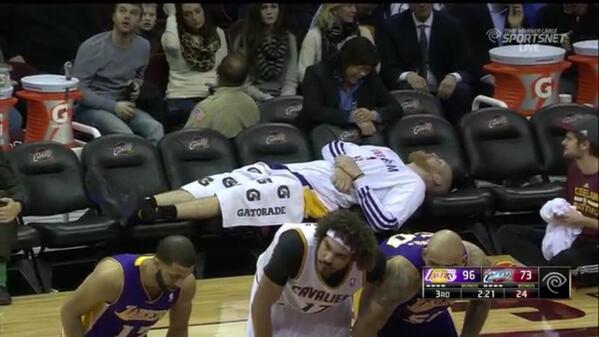 Despite only having eight players to dress on Wednesday night, the Lakers still beat the Cavs 119-108. However, there was one problem with that agenda. Since Jordan Farmar and Nick Young were injured during the game and Chris Kaman had fouled out, the Lakers didn’t have any available players on the bench when Robert Sacre fouled out with 3:31 left in the 4th quarter. However, due to an official rule, Sacre was permitted to finish the game; he was given a technical though, per the rule.

The Pacers might want to look into this and dress only five players in the Eastern Conference Finals so that Roy Hibbert can’t foul out in the second quarter of every game against the Heat.

The photo above of Chris Kaman using the bench as a sofa during the third quarter.