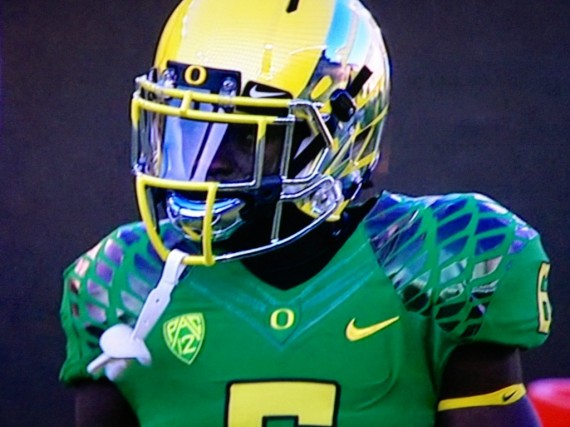 There were a total of 14 secondary violations by the Ducks, all of them pretty minor.

“It’s all about having checks and balances and monitoring systems,” said Jody Sykes, Oregon’s chief compliance officer since June 2013. “There are some silly rules in there but we are part of the NCAA and we have agreed to be a member and we are responsible for those rules.”

In the case of the shaving supplies, “under NCAA rules parents are an extension of their recruit son or daughter,” Sykes said. “The same concept applies whether it’s a two-dollar thing or a two-hundred dollar envelope of cash.”

After the shaving cream violation, the mechanism of Oregon’s internal compliance staff kicked in as it does for every other infraction: The parent repaid the nominal value of the extra benefit, staffers were re-educated about the rules and the violation was reported. In a seminar for media members on Monday, Oregon compliance officer Bill Clever said that an athlete whose eligibility is compromised can be reinstated within a matter of days, though each case depends on the severity of the violation.

In three cases football assistant coaches Ron Aiken and Matt Lubick mistakenly returned a text message or phone call to a “PSA” — prospective student-athlete — during a time in which coaches were limited in the contact they could initiate with a recruit.

Other violations weren’t as straight-forward: At a team meal for the Oregon baseball team, there was “impermissible entertainment” in the form of miniature golf and laser tag. Teams can provide an occasional meal for their athletes — Sykes said Oregon’s athletes are allowed to be provided 12 meals per academic year — and entertainment, too. In this case, Sykes said, the entertainment must have been considered excessive.

NCAA violations are structured by a four-part scale where the so-called “major” penalties are classified as Level I and Level II infractions. Secondary violations are Level III and Level IV, which are termed “breach of conduct” and incidental infractions, respectively. Of Oregon’s 14 self-reported violations in 2013-14, all but one fell under Level III. The remaining infraction — a “squad list violation” by men’s basketball operations director Josh Jamieson — was a Level IV. Two of Oregon’s Level III violations were redacted entirely.

Oregon is currently on probation until 2016, so it’s important that they avoid any sort of problems with the NCAA.