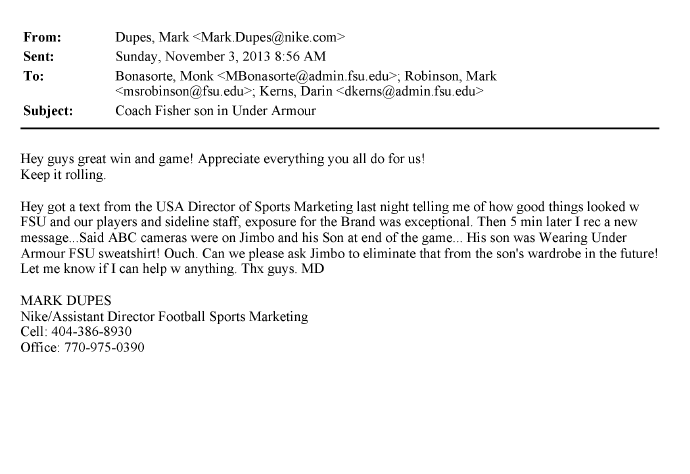 Nike was not happy that Jimbo Fisher’s son was spotted on TV after a Florida State victory while wearing an Under Armour sweatshirt. Never mind the fact that Under Armour is licensed to produce some FSU gear, Nike still wants to control the show.

The Wall Street Journal talked with a FSU associate athletics director and he had this to say:

Asked about the email Thursday, Monk Bonasorte, FSU senior associate athletics director, said he remembered receiving it but hadn’t acted on it. “What am I going to do, go to coach and say, ‘Hey can you take that shirt off him?'” Bonasorte said. “I’m not going to call Jimbo Fisher and tell him what his son can wear.”

Bonasorte said he didn’t think the email should be taken too seriously. “I think Mark was just trying to say, ‘Hey, can the coach’s son wear something else?'” he said. “It was more just a joke to us. It wasn’t Nike being the big bad wolf telling a kid what to wear.”

In a statement, Nike said its “relationship is with the Florida State Department of Athletics and does not extend to their family members.” Jimbo Fisher declined to comment. Dupes did not return calls seeking comment.