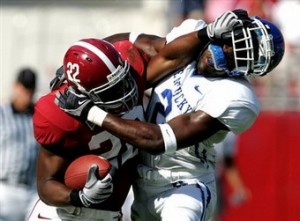 A few quick notes on the upcoming football year. I don’t think preseason #1 Alabama will repeat as national champions. The SEC is too hard a conference and a team like Arkansas, a sleeper of mine, will beat them. Likewise, #2 Ohio State (hopefully) will not play for the National Championship because they will lose to a conference team (praying Michigan). My national title sleeper is Boise State, who has two tough games, @ Virginia Tech and Oregon State, but running the table is possible and would possibly rid the BCS system entirely having a mid major in the championship game.

For the heisman, last years winner running back Mark Ingram, will not repeat. I think one of these quarterbacks, Ryan Mallet, Jake Locker, Case Keenum, Jacory Harris, Terelle Pryor will take the trophy this season.

Here are some top non-conference matchups.
September 4th- Connecticut @ Michigan– 3:30, ABC. Huge game for the Wolverines. This is a make or break year for Rich Rod and this game set the table for the season. It’s vital to come out with a win, but Michigan can’t come out expecting to win, because UCONN is VERY capable of pulling off an upset.

These cheerleaders also seem excited to get the football underway.